Mirroring the growing rise in popularity of folk music sweeping the county, John Avery Lomax, Jr., Howie Porper, and Ed Badeaux started the Houston Folklore Society in 1950. Their monthly meetings, performances, and picking parties set the stage for the first generation of folk musicians in Houston. Congregating at the Jester Lounge in the early 1960s, a group of young and old including Guy Clark, Kay (later K.T.) Oslin, Frank Davis, and others joined more established musicians like Lightnin' Hopkins. While the majority sang traditional folk material, they all began to hone their performance skills.

After the Jester Lounge closed in 1966, a new coffee house filled the folk void. Sand Mountain Coffee House became the new home of Guy Clark, Townes Van Zandt, Don Sanders, Jerry Jeff Walker, among many others. The coffee house was just that and Mrs. Carrick who ran the establishment kept close tabs on her performers, hoping she could save them from the perils of drink and drugs. Because of her strictness, another folk club sprang up in downtown Houston, The Old Quarter. Known for its harder leanings and unique clientele, over the years, it became a go-to place for visiting musicians.

In 1970, another major venue opened in Montrose, Anderson Fair Retail Restaurant. By this time, some of the first generation of performers had or were about to move on to Nashville, include Clark and Van Zandt. Another group of singer-songwriters filled the void. More established players like Don Sanders shared the stage with Vince Bell, Bill and Lucille Cade, George Ensle, and Eric Taylor.

Moving into the mid 1970s, Houston's folk scene ballooned with talent and venues. David Rodriguez, Wheatfield, Dogtooth Violet, Lucinda Williams, Lynn Langham, Nanci Griffith, Richard Dobson, Shake Russell, Jack Saunders, Reb Smith, Danny Everitt, Dana Cooper, John Vandiver, and others performed at venues across town. Those included Anderson Fair, Corky's, Theodore's, Steamboat Springs, Rockefeller's, Texas Opry House, Sweetheart of Texas Concert Hall and Saloon, and many flight-by-night venues. A band or musician could easily be booked at two different venues in one night. There was a strong element of competition, but also collaboration. Performers were fans of other acts. While not co-writing, singer-songwriters would compare their work at morning breakfasts at Anderson Fair.

As the 1980s, reared their head, some relocated to Austin, but others kept going strong. The Shake Russell and Dana Cooper Band ruled Houston in the first years of the decade. Lyle Lovett and Robert Earl Kean made their mark early on. By the mid-1980s, many of the mid-1970s venues began to close. In addition, the fan base began to move on and start families. Nanci Griffith, Lyle Lovett, and Robert Earl Keen began making their name in Nashville, during the credibility scare.

While some of the original venues still exist, like Anderson Fair, the thriving folk community came to an end. Yet this time period still serves as an inspiration for up and coming Texas singer-songwriters.

The Houston Folk Music Archive exists to save the history of this remarkable time. Through archival collections, oral histories, and this online exhibit, we are documenting the people, places, and music that made Houston a folk mecca. 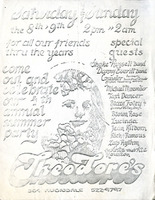