Liberty Hall was a music venue located in downtown Houston, Texas from 1971 to 1978. It was originally owned and operated by Michael Condray, Lynda Herrera, and Ryan Trimble. Hosting a wide variety of performers, including Bruce Springsteen, ZZ Top, The Velvet Underground, The Ramones, Lightnin' Hopkins, Big Mama Thornton, and many more, it was known for its low admittance prices of sometimes only two dollars to hear nationally known entertainers.

Before Liberty Hall, Condray and George Banks, the future graphic illustrator of Liberty Hall posters, opened Jubilee Hall which became the Family Hand, a restaurant and entertainment venue. The restaurant served a vareity of dishes, prepared by Thera Neumann, the African-American female chef. When Condray, Herrera, and Trimble began looking for a new location to open an entertainment venue, Neumann found the building that would become Liberty Hall. The building was originally a church built in the 1940s and later became the American Legion Post 391. On March 4, 1971, it opened as Liberty Hall.

Besides the many musicians that performed at Liberty Hall, the venue hosted plays and comedy performances. Cheech and Chong performed for a completely sold out four-night stand for two dollars a ticket. Cheech and Chong credit Liberty Hall for their success. Liberty Hall also hosted rock opera director C. C. Courtney's play "One Flew Over the Cuckoo's Nest" from March 23 to April 22, 1972. At the time, it was the longest running play in the history of Houston.

Not strictly an entertainment venue with a bar, Thera Neumann cooked red beans and rice every night and other soul food dishes. Some performers, like John Lee Hooker, flocked to the kitchen to eat Neumann's cooking.

Around 1973, Herrera left Liberty Hall with Condray following in 1975. Trimble later shared managing duties with Roberto Gonzales, who had been tasked with promotions. They both stayed on until the venue closed in 1978.  The building that was once Liberty Hall was soon demolished after its closing. Today, a parking lot near the Toyota Center sits where Liberty Hall once was.

Liberty Hall and its impact on Houston still lives on. In 2016, artist Jamal Cyris created the mural, Lightnin' Field, on a building at Main Street Square in downtown Houston. The mural is a series of identical Liberty Hall posters featuring Lightnin' Hopkins dated 1975-01-16 - 1975-01-19 posted one on top of the other. 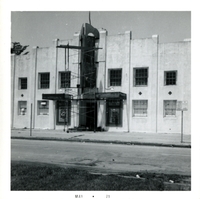 Black and white photograph of construction of the Liberty Hall sign 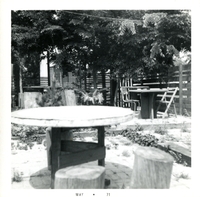 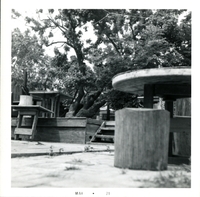