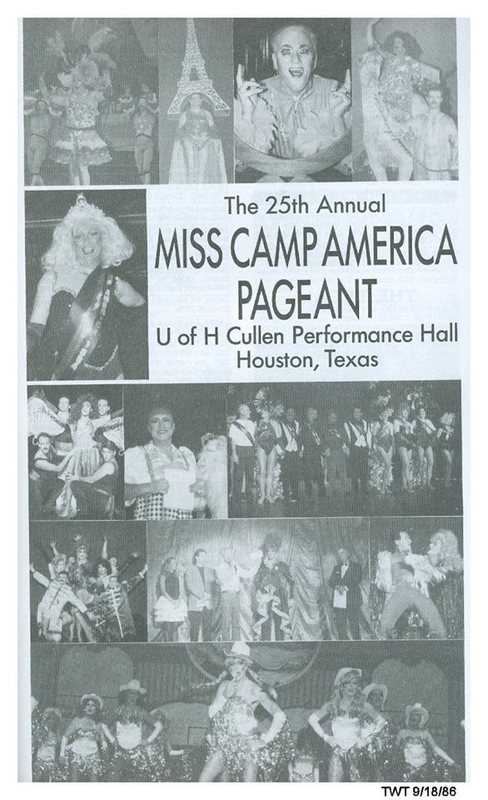 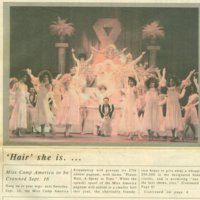 The Miss Camp America Pageant began in 1969 as a birthday party for Pat Petty. This competition ran until 2006 and included more than 250 members. In 1988, the pageant became a foundation has donated over $1 million in profits to charity, primarily AIDS-related charities. After the pageant was retired, the Miss Camp America Pageant crown was gifted to the Gulf Coast Archive & Museum of GLBT History [GCAM]. The crown can be seen on display at the first floor Cultural Center in the Montrose Counseling Center building. The name itself is a play on the Miss America pageant and the pageant is supposed to be a parody of the Miss America Pageant. The Miss Camp America organization was also very engaged in the community.
According to This Week in Texas, members of Miss Camp America visited AIDS patients in local hospitals on a monthly basis. During the year of 1990, they distributed practical gifts to each patient. For the holidays, they made and distributed special gifts appropriate for the season (This Week in Texas, 1990). The chairman of the board during that time, David Stewart, spoke about the strong support they also showed to the Stone Soup food pantry. Each month, members of Miss Camp America published “a list of most-needed items in [their] newsletter. [Their] members [brought] those items to [their] monthly meeting and they [were] delivered to the Stone Soup food pantry” (This Week in Texas, 1990). They as well provide many other fund-raising organizations with “manpower, costumes and sometimes even the campiest showgirls in town” (This Week in Texas, 1990). Miss Camp America’s community involvement included organizations such as Star Nite ‘90, Stone Soups, AIDS Foundation Houston, the Gay Switchboard of Houston, and the Montrose Clinic.