From Literary Societies to Tea-Trike 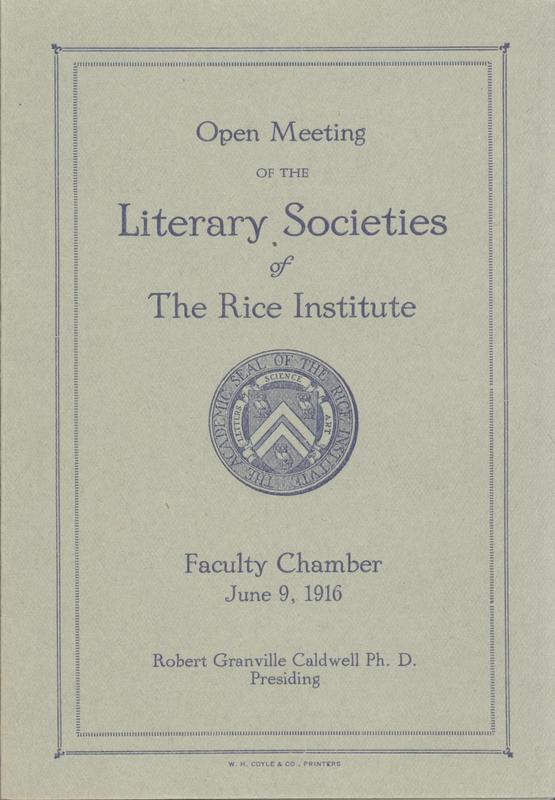 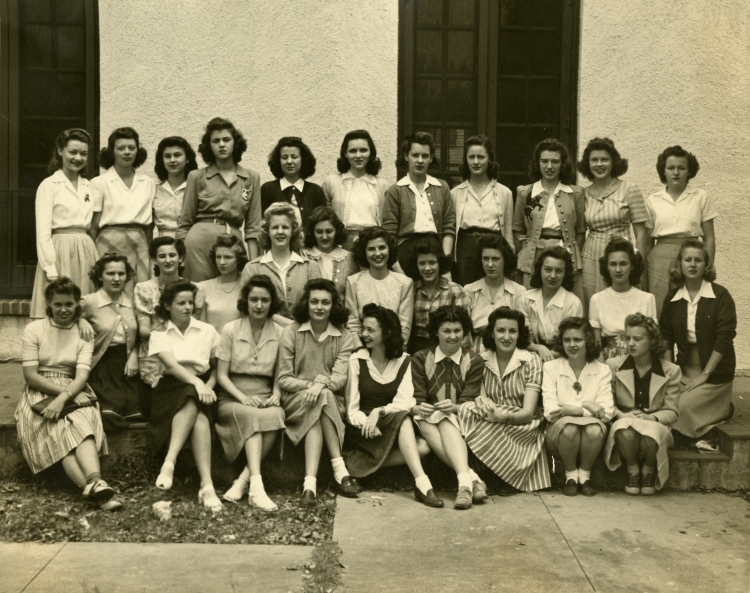 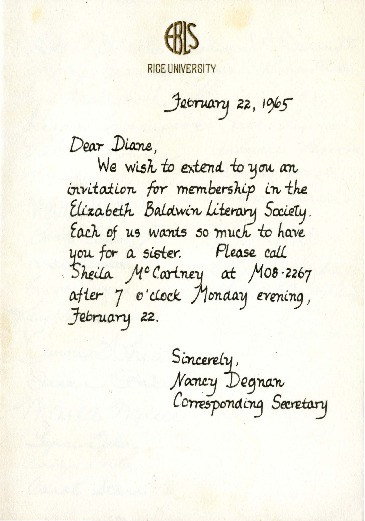 Before 1957 when women were allowed to live on campus for the first time, literary societies functioned as the only social space women had to interact with one another. Originally established to focus on literature, “the lits” as they were called colloquially, began to shift their attention towards more social events such as plays and parties.

In 1914, the first literary society, Elizabeth Baldwin Literary Society (EBLS), was created to discuss literature and the sociological problems women faced in the United States. In 1916, EBLS helped organize Rice’s student-run newspaper, the Rice Thresher, with the help of the men’s literary societies--the Owl Literary Society and the Riceonian Literary and Debating Society. Men's literary societies, which were never as necessary to socialization as the women's, were finally dissolved under the stress of WWI enlistments. Because the women had no other way to “define their social group and status”, interest in the female lits continued to increase (3). To accommodate the growing female student population and enthusiasm for lits, in 1919, six members of the EBLS formed a new lit called the Pallas Athene Literary Society (PALS), and in 1924, the EBLS and PALS jointly helped charter another lit called Owen Wister Literary Society (OWLS).

“In the early [1920s] a number of social clubs, very much like fraternities and sororities, sprang up at Rice” (4). These groups hosted such social events as formal meals, dances, and boat trips with new members being called “pledges.” In 1922, with President Edgar Odell Lovett’s spirit of a more democratic student life and the intention to foster more college pride and identity, the administration banned social clubs. Nevertheless, there was still a strong need for developing community among the female student population; as a result, the female lits continued as strong as ever.

Through the 1920s, 30s, and 40s, the focus of the literary societies turned from the written word toward social activities. Fredericka Meiners ’63 believed that the “administration officials may have winked at the literary societies’ social focus because they did not consider women’s activities as important as men’s.” (5). Due to invitation only membership and an undemocratic rushing process, the lits began to be seen as exclusive social clubs (i.e. sororities) for the rich, young Houston women similar to the ones that existed in the early 20s. In 1947, Hugh Scott Cameron, Rice’s Dean of Students, pushed for inclusivity among the lits through the creation of another literary society (SLLS) named for Sarah Lane, the current Advisor to Women.

In 1950, the administrators’ desire to generate a more democratic, inclusive environment resulted in the inception of four more literary societies: Chaille Rice (CRLS), Olga Keith (OKLS), Virginia Cleveland (VCLS), and Mary Ellen Lovett (MELLS). (The last two lits merged in 1959 to form the Cleveland-Lovett Literary Society, or CLLS). This gave every female student the opportunity to join a lit. Even though the four older lits opposed the creation of the new ones, pressure from administration, specifically Rice president William V. Houston, forced them to accept the new lits and liberalize rush rules. (Each existing lit sponsored the creation of a new one.)

The institution of the college system may have been the start of the decline of female literary societies. Women finally had a place on campus, so the social space provided by literary societies was no longer needed. Beginning in 1962 with the disbandment of OKLS, the lits began to dissolve one by one, often with the intention of strengthening membership in the remaining lits. The end of the 60s saw the termination of four more lits: CLLS, PALS, SLLS, and CRLS. The EBLS and OWLS lasted into the 80s. The year all residential colleges became coed (1988) was the last year of the existence of the literary societies. This may have been due to the fact that women had finally achieved equal social status to the men. Despite all of this, “the literary societies remained an important complement to college life…[and may have even] enriched the college system [by] creating a [female] sisterhood” among many of its members (6).

Even into the mid-90s, many literary society alumna were still involved in meeting the needs of Rice University through the establishment of a $10,000 endowment fund for Fondren Library. 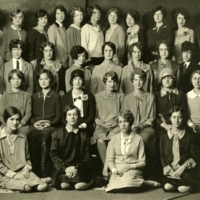 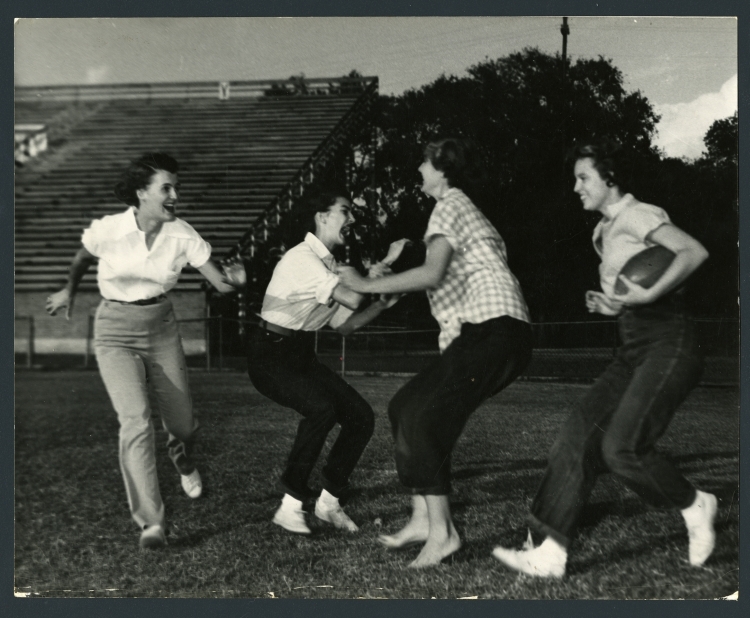 The most popular intramural sport at Rice may owe its existence to the literary societies. In November of 1950, the PALS and EBLS fought a powderpuff football match to raise money to provide aid for war orphans through the Charity Drive. Both teams held practices and scrimmages before the night of the big game (November 10, 1950). The game was played in the Rice Stadium, and the half-time performances included the PALS marching band and the EBLS drill team. By 1959, when Jones College had been existing for almost 2 years, powderpuff football had been instituted as a Rice tradition. 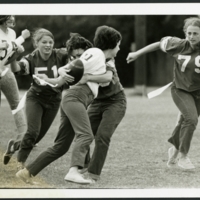 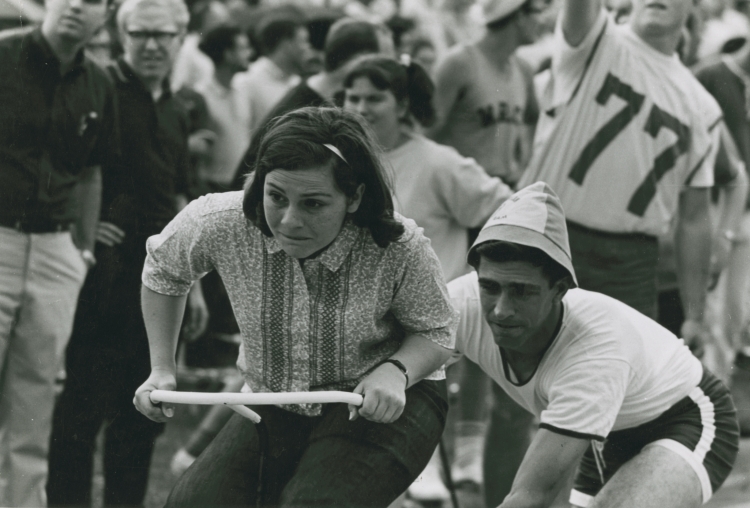 In the spring of 1966, after Brown, the 2nd female residential college, had been existing for about 10 months, the undergraduate women of Rice University created Tea-Trike. Modeled after the famed Beer Bike competition that was, at the time, only allowed for men, the women championed their right to participate in more reckless festivities during Rondelet weekend. The intention for the race was to allow women to have more freedom in intercollegiate competition while forcing them to retain their “feminine” qualities through such things as chugging tea out of flower-covered beer cans, not allowing their posteriors to raise up from the tricycle seat, and having a 1 AM curfew. By the 1970s, the Beer Bike competitions had morphed into the form it takes today. The year 1971 was the last year of Tea-Trike, and by 1974, female students at Rice had already instituted their own Beer Bike race. Finally, in 1975, full gender integration of Beer Bike was achieved when the first woman competed in the men’s race. Presently, some colleges such as Will Rice and Lovett call their Orientation Week mock bike, Tea-Trike. 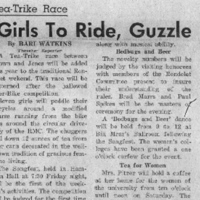