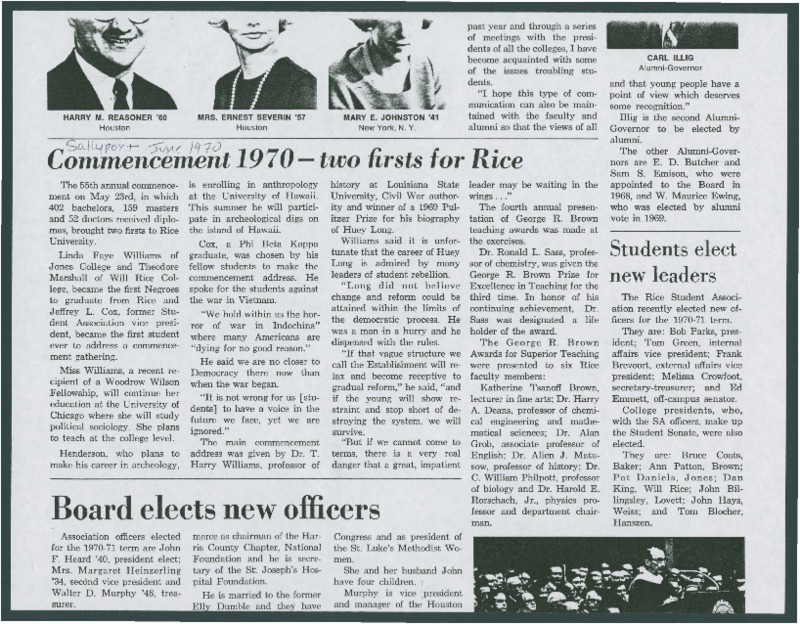 Because Asians, Hispanics, Arabs, and other non-Negro/Black races were for many years considered to be members of the “white” race, there are no truly verifiable records of the very first non-Caucasians at Rice. In addition to this, Rice did not keep records of students based on race until sometime in the 1980s. Before 1957, Asian students and professors like Riki Kobayashi were already attending and teaching at the institution. (Kobayashi also obtained his BS from the institution in 1944 and came back to teach in 1951.)

Rice’s charter originally outlined that that school was to educate only “the white inhabitants of the City of Houston, and State of Texas” (7). Rice’s policy was, from the beginning, anti-Black. By the early 1960s, Rice was out of step with the rest of the universities within the nation. It was one of the last private schools in the South to desegregate because of the trustee’s false sense of financial security. In the late 1940s, Rice made a lucrative purchase in the form of the Rincon Oil Field. Additionally, George R. Brown’s ties to Lyndon B. Johnson provided an chance for Rice to work with the newly formed NASA and its Manned Spacecraft Center.

As Rice grew, the institution began to be in serious need of external funding from sources outside of the oil industry and their Rincon Oil Field asset. Federal funding as a source of income became extremely important to the maintenance of the school. But these federal contracts (including the one with NASA) were not enough, and they were also in jeopardy because of the federal government’s strict enforcement of racial non-discrimination clauses. The charter prohibiting the trustees to admit black students and charge tuition forced Rice between a rock and a hard place. Rice needed to amend its charter to allow for the establishment of both of these things. On September 26, 1962, Rice’s Board of trustees unanimously passed a resolution to amend the charter, and, finally, on February 21, 1963, Rice’s attorneys followed through with filing the lawsuit.

On September 20, 1963, two alumni, John Coffee and Val Billups, filed a suit of intervention against Rice for breaking William Marsh Rice’s Charter. They claimed to not be against desegregation and the charging of tuition but were more concerned with “the sanctity of testamentary documents” (8). (It is important to note that Rice had already technically broken the charter when they allowed non-Texans to enroll in the very first entering class in 1912.) Even though appeals were pressed until 1967, a Texas judge ruled in favor of Rice on March 9, 1964. This decision allowed Rice to officially desegregate and actively seek funding. They enrolled their first black student, Raymond Lewis Johnson, in the fall of 1964.

As a graduate student, Johnson lived off-campus and was not involved in the on-campus residential social space of the undergraduates. Aware of this, he wrote a letter in 1965 to Rice president Kenneth Pitzer, asking for someone to aid the incoming black undergraduate students that were entering the on-campus “environment that was not prepared for them” (9). Even into 1966 when Linda Faye Williams, a black female student, had just enrolled in the university, she would isolate herself in the physical space of her closet to cry and deal with the academic and social stresses of the university. At that time, there were no discussions on student wellbeing. In Rice’s rigorous academic atmosphere, virtually all students felt intense emotional pressure to perform well academically, but this negative emotional state was exacerbated for black students who also had to deal with overt racism and other social pressures.