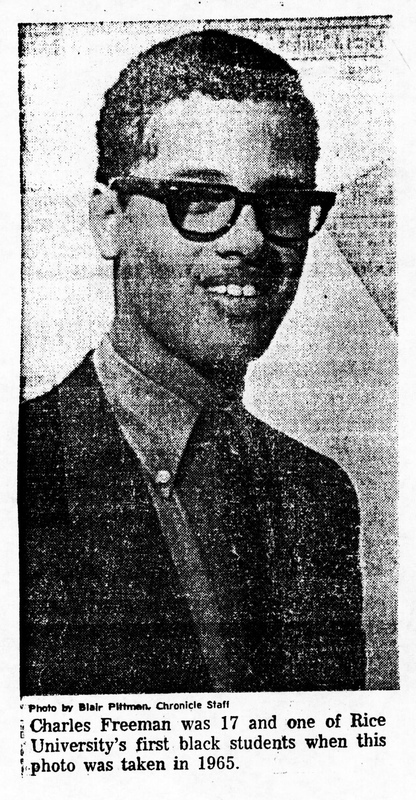 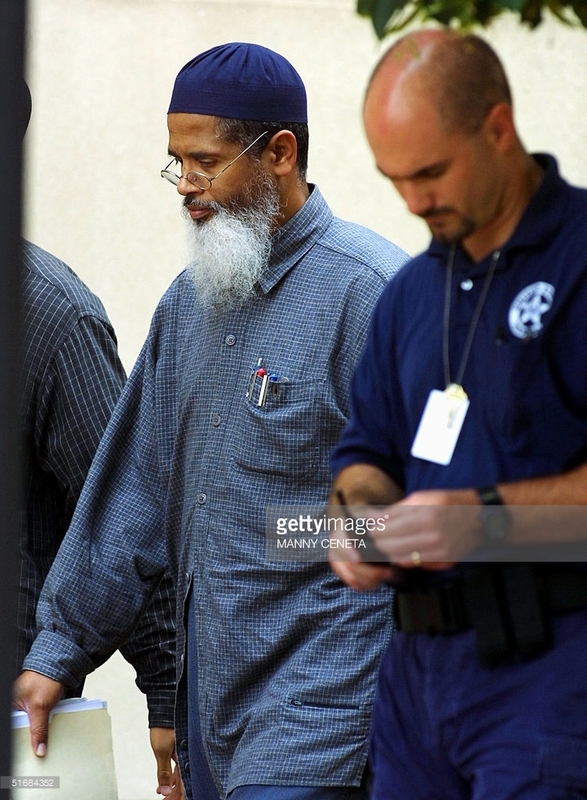 Charlie Freeman and his son at the U.S. District Courthouse - 2003

Charles Edward Freeman III was the first black undergraduate male to attend Rice University. He, with Jacqueline Elizabeth McCauley, integrated the undergraduate division of the university in 1965.

Freeman was born on June 24, 1948, in New York City, New York, to Charles Edward Freeman, Jr. and Ruby E. Freeman. At some point, his family moved to Port Arthur, Texas, where Freeman attended the all-black Lincoln High School. In 1965, at the age of 17 (he skipped a grade), Freeman graduated high school as co-valedictorian and a National Merit finalist. He enrolled in Rice University on a five-year William Marsh Rice Scholarship and was the first and only black undergraduate male at the time. He planned to study biochemistry and pre-med with the intent to graduate and study medicine at Baylor Medical College (now Baylor College of Medicine).

Freeman’s time at Rice was difficult and challenging both academically and emotionally (with both of these potentially feeding into each other). The academic atmosphere at Rice was tough due to a very intense curriculum and a very severe grading system. On top of this, the social atmosphere was completely isolating for Freeman who was the only black male living on a virtually all-white campus. With other students suffering the same academic pressures as him, he felt they were distant, unwelcoming, and unaccepting towards him. He also felt that the faculty were extra hard on him due to his race. All of these combined issues and stresses may have contributed to his poor grades. He was placed on probation three times resulting in an academic suspension from Rice in January of 1967.

Changing his field of study to the social sciences, Freeman immediately enrolled at the largely-black Texas Southern University where he became more interested in the civil rights movement and campus politics than in his academic studies. On May 17, 1967, intense riots between black students and white police officers broke out on the TSU campus. One officer, Louis Kuba, ended up dead while one students and two officers were wounded. Over 400 people were arrested, but only 5 people (later dubbed the “TSU 5”) were tried. Charles Freeman was one of them. The charges included murder, assault to murder, and violations of a state anti-riot ordinance (conspiring to cause unlawful riots). Possibly resulting from the charges brought against him, Freeman was expelled from TSU for disciplinary reasons, but he also did not pass a single class he took that semester. He was disallowed from taking final exams as a result of his indictment.

Through the rest of 1967, Freeman read a lot and traveled some. By early 1968, Freeman had moved to Houston and was working various odd jobs including a position with the NAACP. He got involved with the Bellaire Presbyterian Church young adult group and began working with one Rev. Lawrence D. Spencer to “[channel] resources of the [Presbytery of Brazos] churches [towards]…formulating new ways of dealing with the racial crisis” (32). After presenting their preliminary proposal to a committee comprised of members from the presbyteries, Freeman and four of his friends (later to be called the “Black Cats”), received funding to research and generate a more formalized proposal to be submitted to funding agencies.

The Black Cats focused on the following two ideas: (1) the distinction between militancy and anarchy and (2) differentiation between pro-Black and anti-White. As a group, the Black Cats favored militancy while rejecting anarchy and identified as pro-Black while refusing to be anti-White. With Freeman as the leader of the group, the Black Cats “assembled information from the Black poverty community and from Black students who wanted to do something positive and relevant to deal with the racial crisis” (33). Many positive improvements came out of the group including obstructing gang warfare, calming tensions between militant groups in the Black community, encouraging and convincing several suburban presbyterian congregations to get involved with racial issues, and providing the Presbytery of Brazos leadership with insights into combating racism in various communities. (They were even keynote speakers at the Presbyterian National Ministries Conference in Montreat, North Carolina in August 1969 where they pushed for a new type of ministry and service that dealt with racial matters.) The end of summer approaching, the Black Cats dissolved as most members left to focus on their studies in school.

October of 1968 saw Charles Freeman tried for murder in Victoria, Texas, where the trial had been moved from Houston. Freeman was the first of the TSU 5 to be tried. There had been serious rumors that Freeman had not even been on campus when the riots broke out, prompting many to believe he had been selected as a scapegoat due to his political beliefs and activist pursuits. Resulting in a hung jury, the proceedings were declared a mistrial. Dropping the charges and deciding to not retry him, the court let Freeman out on $10,000 bonds. Freeman was, legally, a free man.

In November of 1968, after completing his one year of suspension (with an additional 11 months) from Rice University, Freeman first petitioned the Committee on Examinations and Standing to be readmitted for the 1969 spring semester. After several more attempts, the Freeman family still received little response from Michael V. McEnany, Dean of Undergraduate Affairs and Chairman of the Committee. The Committee might have been reluctant to readmit him due to the controversies surrounding him. Eventually, the Committee delivered a 6-0 ruling (with two abstentions) allowing Freeman be readmitted.

In early April of 1969, the new acting president, Frank E. Vandiver, vetoed the decision made by the Committee on Examinations and Standing. It is believed that this was the first time that a president had overruled a decision made by the Committee, a predominantly self-governing body. Vandiver reasoned that the “academic integrity of Rice” (34) was at stake. Many faculty and students perceived his decision to be based on politics, which would be “an attrition of civil liberties of the members of [Rice] university” (35). As a result of Vandiver’s actions, over 300 students and faculty gathered to mass protest and pass a resolution formally accusing the university of wrongdoing and supporting Freeman’s readmittance. Vandiver was adamant to reconsider. Influenced by intense pressure from both faculty and staff, the current campus climate (i.e. the Masterson Crisis), and the large amount of publicity from local news outlets, he relented and allowed the original ruling of the Committee to stand. (Some people argue that Freeman was a “convenient issue” for more liberally-minded students to rally behind, desiring more to further their own image than in providing aid to Freeman [36].)

Very soon after the mass protests and petitions from the Rice University Student Senate, the administration notified Freeman that he would be readmitted if, and only if, he completed four 3-credit hour classes at an accredited college or university with a passing grade of “C” or better. In the summer of 1969, Freeman attended the State University of New York at Buffalo and obtained three A’s and one B. He was formally readmitted to Rice in the Fall of 1969.

During that school year, Freeman again faced academic struggles and discontent. He transferred to Lamar University in Beaumont, Texas, graduating with a degree in literature and history. By the age of 28 with a wife and two children, Freeman was again in Port Arthur, this time selling insurance through his father’s firm.

Growing tired of his current lifestyle, Freeman again decided to pursue more university education at the University of Houston, a place he was actively involved with during his time off from Rice. He ultimately earned an MBA and a JD, the pursuance of the latter inspired from the NAACP’s actions in helping him during his trial proceedings as one of the TSU 5. Some time in the 1980s, Freeman converted to Islam. This came to heavily influence his later life and career, which saw many controversial cases. One of these cases involved Zacarias Moussaoui, dubbed “the 20th hijacker” in the September 11, 2001 terrorist attacks. Because of his religion and his activist beliefs in Black civil rights, “[Freeman] felt religiously and legally obligated to come to [Moussaoui’s] assistance” (37).