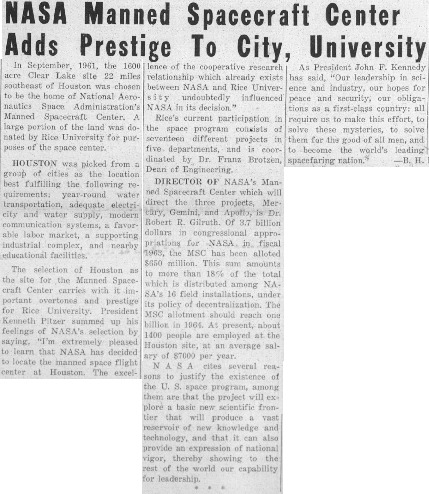 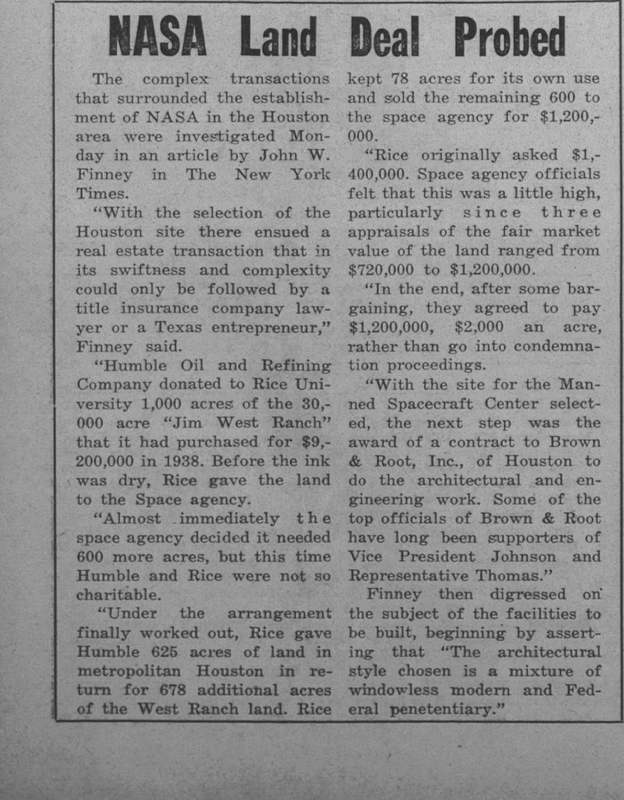 Similar to ten years before, the year 1960 saw major changes occurring at Rice. First, the school changed its name from “the Rice Institute” to “Rice University.” Second, President William V. Houston suffered a heart attack and resigned from office when it became clear that he could not continue to carry out his duties. The board of trustees began to actively search for a new, top-tier, excellent president. They eventually chose Kenneth Sanborn Pitzer, which proved to be a very wise choice.

Pitzer was a prominent chemist who served as the former chairman of the General Advisory Committee of the Atomic Energy Commission (AEC): “In the late 1940s he was instrumental, as director of research for the newly established AEC, in crafting close ties between [the] government and the universities” (25). The trustees were aware this, so they chose him because they knew that he could work well with the government in getting the university more federal research funding.

Pitzer also proved to have a lot of energy and desire to launch Rice to national preeminence. His attempts to accomplish this included the following:

Pitzer’s two conditions to accepting the position of president at Rice were that he would be allowed to continue his research and that the school must desegregate. The trustees were slowly beginning to understand the adverse effects segregation was having on their university due to more and more federal contracts and grants including stricter non-discrimination clauses. Pitzer’s research contract with the AEC, with its more stringent non-discrimination clause, forced the trustees to fully come to terms with and address desegregation. Many of the Rice trustees did not want to desegregate, but Rice desperately needed the money. This forced them to come face to face with the issue of segregation over and over again. To get the money they so desired, Rice would have to charge tuition and desegregate. The administrators’ and trustees’ first instinct was to institute tuition (because they didn’t have it), but because of pressure to desegregate, they knew they also HAD to accept black students into the school.

On September 19, 1961, NASA came to save the day when they brought forth contracts to Rice regarding using Rice’s property in Clear Lake as a location to build their Manned Spacecraft Center. Notwithstanding, through 1961 and 1962, Rice faced pressure from the government and national foundations to desegregate if the school wanted to obtain any money or have any grants approved. By this point, the trustees knew they had to start taking action. In May of 1962, the Rice board of trustees formally decided to take court action to amend the charter to allow the charging of tuition and desegregation of the university: “Rice’s trustees had only deviated from charter language in the past with the express consent of the State of Texas, and they believed that such consent was necessary for this change as well” (26). But, the thing to understand is that Rice’s focus was on obtaining urgently needed funds; the administrators and trustees were not focusing on the wellbeing of the black students that would be integrating the school or the current students that would have to pay tuition for the first time. George R. Brown argued that “The issues of tuition and segregation…were secondary. The point was to bring in enough money for the school to pursue aggressively its program of expansion” (27).