Edgar Odell Lovett (1871-1957), mathematics professor and president of Rice Institute (now Rice University), was born in Shreve, Ohio, on April 14, 1871. After graduating from Shreve High School he entered Bethany College, Bethany, WV, where he graduated in 1890. From 1890 until 1892 he was professor of mathematics at West Kentucky College; in 1892 he became an instructor at the University of Virginia, where he continued his studies and received degrees of M.A. and Ph.D. in 1895. The following year he studied in Europe and received M.A. and Ph.D. degrees from the University of Leipzig in 1896. In 1897 Lovett lectured at Johns Hopkins University and the universities of Virginia and Chicago, and became instructor in mathematics at Princeton University in September. He was promoted to assistant professor of mathematics in 1898 and from 1900 to 1905 held the rank of professor. From 1905 to 1908 he was both professor and head of the Department of Mathematics and Astronomy at Princeton.

In 1907 he was asked to head Rice Institute, Houston, being recommended for the post by Woodrow Wilson, then president of Princeton. He accepted in 1908, moved to Houston, and was formally inaugurated as the first president of the institute on Oct. 12, 1912; he continued in this capacity until his retirement on March 1, 1946. Thereafter, he was associated with Rice as president emeritus, director and consultant.

Lovett was a member of many learned societies, including Phi Beta Kappa, the London Mathematical Society, the American Association for the Advancement of Science, and the Royal Astronomical Society. In 1898 he married Mary Ellen Hale; they had two daughters and two sons. He died on Aug. 13, 1957, and was buried in Glenwood Cemetery, Houston.

No provost served under President Lovett, as he played both roles.

This material is in the public domain and may be freely used. 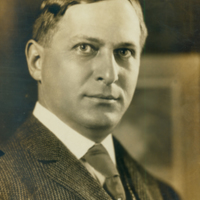