A five-day controversy rose on the campus of Rice University in February 1969 following the appointment of Dr. William H. Masterson by the Board of Trustees as the university’s new President to succeed Kenneth Pitzer, who had resigned in August 1968. The controversy ended with the resignation of Dr. Masterson after only five days in office.

Members of the faculty and student body protested in particular the method by which Masterson had been appointed, which was perceived as a unilateral decision by the Board without sufficient consultation with the committee of faculty and students appointed earlier by the Board to assist in suggesting and screening candidates’ names. A variety of personal objections to Masterson himself were also voiced, along with concern about appointment of a President from within the university (Masterson was a graduate of Rice who had joined the faculty in the Department of History in 1951 and served later as Dean of Humanities before leaving Rice in 1966 to serve as President of the University of Chattanooga).

As a result of the pressure created by the protests and by a campus-wide poll conducted among students and faculty (results of which were made known to Masterson), the controversy ended with Masterson’s resignation as President on February 25th, five days after his appointment had been announced.

The Masterson controversy can be seen within the context of a decade of nation-wide turmoil resulting from (among other things) the Civil Rights movement, the war in Vietnam, the emergence of feminism and women’s rights, and a general rebellion against authority among many of the nation’s youth. (Notable among other campus disturbances of the period was the confrontation between students and National Guardsmen at Kent State University in Ohio in May 1970, in which four students were killed and nine injured).

Within two weeks of the Masterson controversy, a committee was formed to sponsor an undertaking called the Oral History Project on the Presidential Crisis of February, 1969 at Rice University. The project sponsors were Joseph Cooper, Associate Professor of Political Science and Chairman of the Department; Harold M. Hyman, Professor of History and Chairman of the Department; and Richard H. Lytle, University Archivist and Curator of Manuscripts and Rare Books, who was appointed as Administrator of the Oral History Project. An outside consultant and an interviewer were also appointed. The purpose of the project was “to collect data for scholars doing research in social and economic change in the university,” and funding was provided by a grant awarded by Rice University’s Center for Research in Social Change and Economic Development.

Interviews were conducted between May and October 1969 and were recorded on reel-to-reel magnetic tapes, from which transcriptions or abstracts were then made.

Carey Croneis (1954-70) was serving as Chancellor (essentially, provost) during the brief presidency of Dr. Masterson.

In 1970, Vandiver was then named Provost, and went on to simultaneously serve as Vice-President starting in 1975. 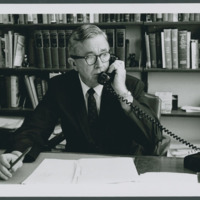