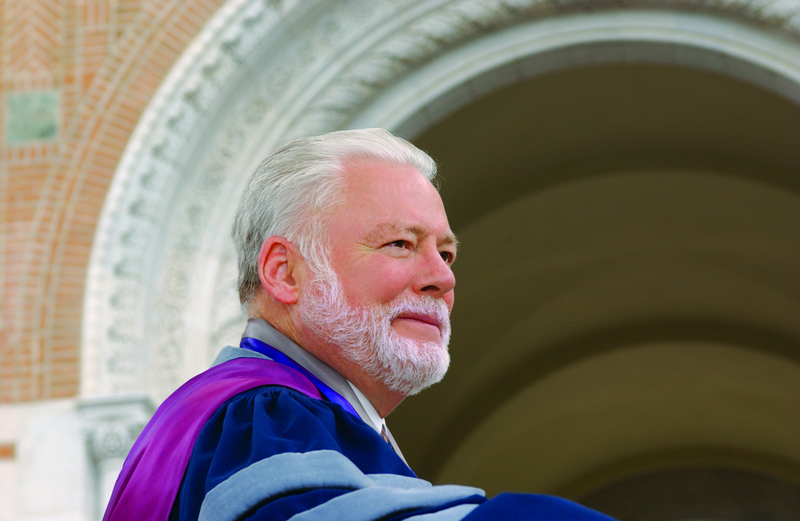 Malcolm Gillis was born in 1940 and spent his youth in rural Florida.  While in junior high school in 1952 he entered the labor force and was employed for the next seven years by farm supply and building materials stores.  He worked his way through high school and then college at the University of Florida, where he met Elizabeth, his spouse of fifty years.  He received both a B.A. and M.A. from Florida.  He received his PhD in Economics from the University of Illinois in 1968.

His first academic appointment was at Duke University in 1968.  In 1970 he moved to Harvard, where he alternated teaching and research with economic advisory work in Indonesia, Colombia, Ecuador, Ghana, Canada and Alaska.  He returned to Duke in 1984 as Professor of Public Policy and Economics, later occupying the Z. Smith Reynolds Chair in Public Policy.  In 1986 he was named Vice Provost and Dean of the Graduate School at Duke and in 1990 he became Dean of the Faculty of Arts and Sciences.

He was named Rice President in 1993, serving until 2004.  Beginning with his inaugural address in 1993, he consistently stressed several principal goals for turn-of-century Rice.  These included internationalization in teaching and research, collaboration across academic institutions and disciplines, the need for substantial growth both in faculty size and academic facilities and enhancement both of undergraduate teaching and graduate research.

During this period, Rice launched the world’s first comprehensive program in nanoscale science and technology in 1994, while beginning a broadening at its focus well beyond the hedges, with nearly 70 new programs in local outreach over the next decade.

New initiatives undertaken during his tenure required significant infusions of new resources.  To this end, his administration developed the University’s first strategic plan, which provided a template for Rice’s first ever comprehensive fund-raising campaign, with a goal of half a billion dollars.  The campaign came to a successful conclusion in 2004, raising $503 million in new resources, allowing among other improvements, a 35% increase both in faculty size and academic space.

While president, Gillis continued to publish in his scholarly specialties of fiscal economics, economic development and environmental policy. A former co-editor of the Quarterly Journal of Economics, the oldest economics journal in the U.S., he published more than 75 articles in scholarly journals and books.  Individually and jointly, he wrote or edited eight books, including the widely cited 1988 co-authored publication Public Policy and the Misuse of Forest Resources.  He also co-authored the leading textbook in the field, Economics of Development, now available in five languages.  His facility in learning languages, especially Spanish and Indonesian, greatly strengthened his research and service in over 25 nations on all continents except Antarctica.  While president, he founded and led several new academic entities.  These included the Shell Center for Sustainable Development, the TEXAS/UK Research Collaborative for Nanotechnology and Biotechnology and the Boniuk Center for the Study of Religious Tolerance.

During and after his presidency, he served on numerous public service boards, including the Federal Reserve Bank of Dallas (1998-2004), the Greater Houston Partnership, BioHouston and many others.  During this period, he also received the Rice Alumni Gold Medal, the NASA Distinguished Service Medal, the Center for the Healing of Racism leadership award, the Person of Vision Award, and the Distinguished Award from the Institute of International Education.  He was a founding member of the Board of International University Bremen in Germany, a very successful institution modeled after Rice.

Gillis resumed teaching in 2005, both in economics and in university-wide courses, under the title University Professor, the highest faculty designation in the university.

In 2004, Board Chair, Bill Barnett, offered a succinct sketch of Rice during Gillis’ period as President:  “in addition to the strategic building program, Malcolm guided an unprecedented period of collaboration with other institutions; a deeper and more fruitful involvement in the community; an enormous enhancement of Rice’s international presence through such things as the Baker Institute for Pubic Policy, study abroad and International University Bremen; a successful effort to maintain diversity under difficult circumstances; a very substantial expansion of the faculty; a foresighted investment in nano, bio, info and enviro science and technology; the biggest expansion of humanities facilities ever; the first addition to the college system in 30 years; the rise of the Jesse Jones Graduate School of Management; and on and on.”

Professor Gillis died in October 2015. He is survived by his wife, Elizabeth, three children and several grandchildren, including a Rice graduate (2009).

Neal Lane served as Provost under President Gillis from July to November, 1993.

James Kinsey served as Interim Provost under President Gillis, in 1994.

David Auston served as Provost under President Gillis, from 1994-1999.

Eugene Levy served as Provost under President Gillis and President Leebron, from 2000-2010.

Online guide to the Gillis presidential papers at the Woodson Research Center.