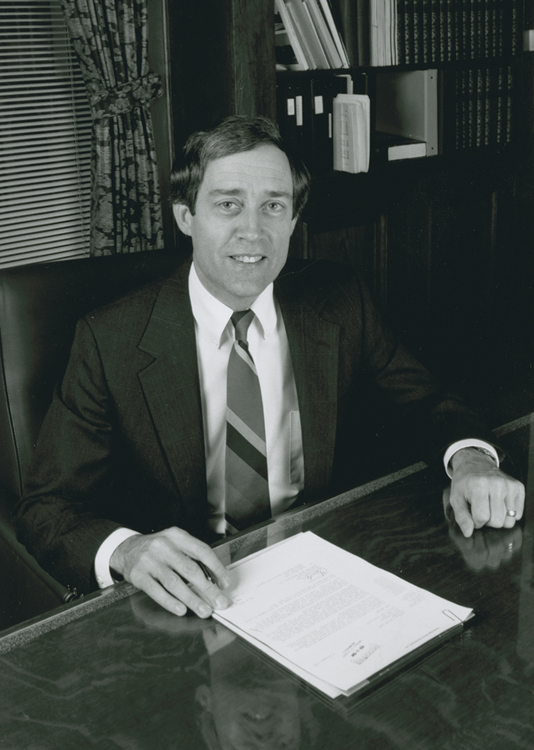 On Friday, October 25, 1985, George Erik Rupp was officially inaugurated as the fifth president of Rice University, after having taken office as President on July 1, 1985. Dr. Rupp began his education in the public schools of New Jersey, worked a paper route with his brothers, and worked through high school as a grocery store checker and stocker. He then became a carpenter, built houses, saved money, and went on to study English and German literature at the University of Munich in Germany and at Princeton University, where was a Phi Beta Kappa member and was awarded a B.A. with high honors in 1964. He then pursued graduate study in theology at Yale Divinty School (Bachelor of Divinity magna cum laude, 1976) and then at Harvard University (Ph. D. 1971). During his schooling, Rupp received a number awards and scholarships, including a Danforth Graduate Fellowship, a Dwight Fellowship, the Tew Prize, the Mersick Prize, and the Daggett Prize.

After receiving his doctorate, Rupp served as Faculty Fellow at Johnston College, part of the University of Redlands, in Redlands, CA. He was appointed Vice Chancellor in 1973 and assumed responsibilities as the school's chief academic officer. Soon thereafter, in 1974, he returned to Harvard's Divinity School, teaching theology and taking a leave of absence in 1976 to conduct research at the University of Tubingen in Germany.

In 1977, Rupp was appointed Prof. of Humanistic Studies and Dean for Academic Affairs at the University of Wisconsin, Green Bay, and was responsible for all of the school's instructional, research, and outreach programs. Rupp then served as Dean of Harvard University's Divinity School from 1979-1985.

Known for at Rice: In signing on as Rice University's president in 1985, at the age of 43, he became the second youngest Rice president (Lovett was 36 at the time of his appointment in 1908) and as a theologian, he was the first non-scientist president. He served Rice for eight years. During that time, two major buildings opened, one for music and one for biosciences and bioengineering (1991). Six interdisciplinary research centers were established, including the James A. Baker III Institute for Public Policy. He also led a revision of the core curriculum to require students to explore fields outside their majors. Research grants doubled, the quality of graduate students improved, and the number of undergraduate applicants tripled.

During his tenure at Rice, Rupp was quoted as saying "Ideas may be important, certainly individuals are important, but institutions shape both individuals and ideas in a very profound way. It's a mistake to underestimate the extent to which institutional patterns make a real difference in people's lives."

Additionally, he said "I have a sense that the thousands of bit decisions that someone like the president of a university makes every day do have a cummulative effect, and it's worth making them seriously and carefully because over the long haul, it makes a difference whether they are made responsibly or indifferently or casually."

Rupp was known for his strong administrative style and for significantly raising the national profile of the university. A disagreement with the trustees over fundraising tactics (trustees' reticence to aggressively develop new resources, depending instead on generosity of past donors) led him to announce in Fall 1992 that he would step down, which he did in June, 1993. Rupp went on to become president of Columbia University in Fall 1993.

Online guide to the Rupp presidential records at the Woodson Research Center.