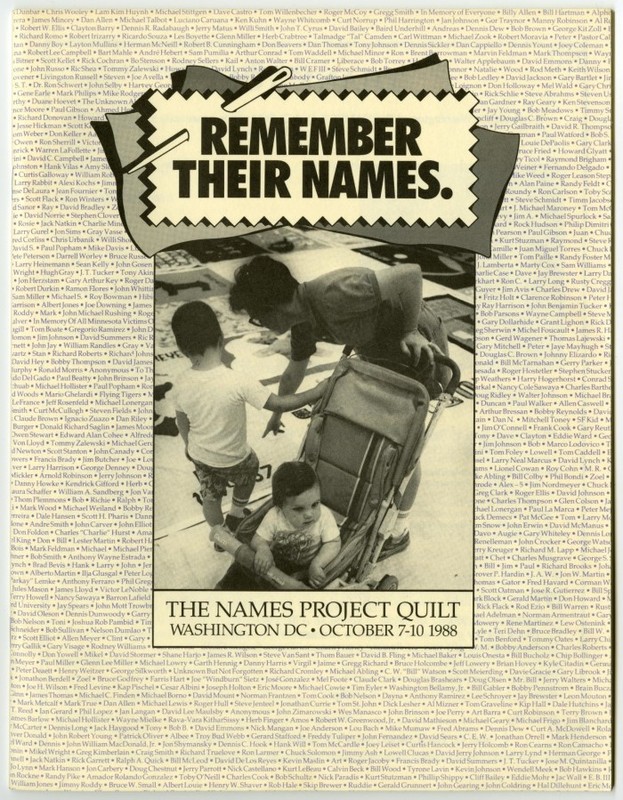 The following text has been reproduced from a press release given by the NAMES Project Foundation in October 1988.

"The NAMES Project is a national AIDS memorial taking the shape of a huge quilt, made up of thousands of individual 3' x 6' panels. Each panel remembers the life of someone who has died of AIDS.

The idea of a quilt as an AIDS memorial originated with Cleve Jones in response to a candlelight memorial service in November 1985. A year and a half later, in June 1987, Jones teamed up with Mike Smith to organize The NAMES Project Foundation. Its goals were clearly outlined:

The response to the Quilt was immediate. People from each of the major cities most affected by the epidemic - New York, Los Angeles, and especially San Francisco - sent panels in memory of their friends and loved ones. The people in San Francisco were especially generous, responding to wish lists in the NAMES Project workshop's storefront window asking for sewing machines, office supplies, and volunteers.

As awareness of the Quilt grew, so did participation. Thousands of individuals and groups from all over the united States, and indeed, from several foreign countries, began to send memorial panels for their loved ones to the San Francisco workshop, to be included in the Quilt.

On October 11, 1987, the The NAMES Project displayed the AIDS Memorial Quilt on the Capitol Mall in Washington, D.C. The Quilt covered a space larger than two football fields, and included 1,920 panels. Half a million people saw the Quilt that weekend.

The overwhelming response to the Quilt during this inaugural display led to a 4-month, 20-city, national tour in the spring of 1988. The tour raised almost $500,000 for AIDS direct care services. These funds remained in their communities and were distributed through local organizations. The tour also generated community spirit, as more than 9,000 volunteers nationwide helped the 7-person road crew move and display the Quilt. Local panels were added in each city, doubling the size of the Quilt to more than 6,000 panels by the end of the tour. The Quilt presently contains almost 9,000 panels.

The Quilt is an ongoing memorial; panels continue to be added as the AIDS epidemic continues unabated. As the toll of AIDS deaths in this country continues to rise, the Quilt is offered as an example of an appropriate, compassionate response to the epidemic"